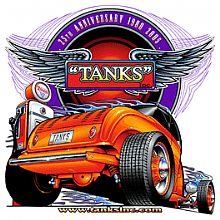 The owner of Tanks, Inc. made his first street rod gas tank in 1965 for his 1927 T-Bucket. He spent the next 28 years in the field of air pollution control, mainly involved with large pressurized vessels that were used to scrub hazardous pollutants from factory emissions. Many of these vessels were larger than railroad tanker cars and they were made from a variety of materials that ranged from common coated mild steel, to exotic materials such as Hastelloy and Monel. Most of them were made from Stainless Steel.  Naturally, they had to be leak proof and manufactured to exacting specifications for correct fit and longevity.

In 1978, he and his street-rodding buddies started building four different models of the 1933-34 Ford and everybody needed a gas tank. Guess who had the background to get the job done?  This led to manufacturing a variety of tanks for local rodders and "TANKS" was launched in 1980 to meet the need. The company incorporated as "TANKS, Inc." in 1990 and has been going strong ever since.

Tanks Inc. has been a leader in the street rod industry, receiving various awards for safety and innovation. In addition, it was the first to introduce style into street rod gas tanks; radiused edges, die-stamped openings, flush-mounted fittings, indented panels and slotted mounting flanges, just to name a few. It was also the first on the block with a true reproduction Deuce tank, though many had tried and failed. Their exclusive "Baffle-Tunnel" made polyethylene gas tanks a viable choice for the rodder. To top it off, the company holds three patents in the automotive field, two of them for gas tanks.

No other company has the expertise of "TANKS, Inc."  to help you with your fuel system needs. Please call your Dealer or contact us for Street Rod gas tanks and accessories.